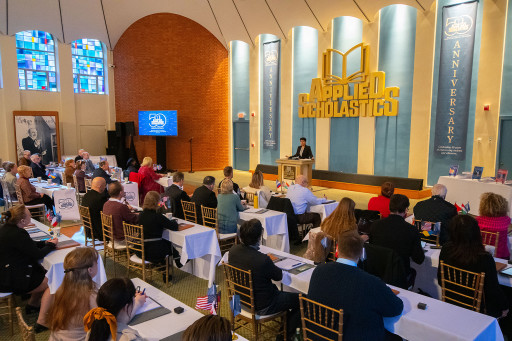 Educators and supporters spanning the globe from Denmark to Samoa and from all across the US gathered at the Applied Scholastics Spanish Lake training center to celebrate this historic milestone.

Educators from around the world converged in St. Louis this past weekend to celebrate the gold anniversary of Applied Scholastics—an international non-profit organization that has empowered students and educators for 50 years on six continents through effective educational programs and materials based on the research and discoveries of L. Ron Hubbard.

This milestone was celebrated with a weekend of festivities at the International Training Center located in Spanish Lake. The events included an awards banquet with performances from the talented After Dark a cappella group from Washington University, and rousing choral renditions from the Midwestern District Choir from greater St. Louis. Sunday's event continued with speakers from Applied Scholastics groups around the world and seminars.

Local community leaders, including the Rev. C. Jessel Strong, a former teacher and pastor who retired after serving as the Presiding Elder over 21 AME churches in the St. Louis Columbia District, and Ms. Marilyn Parker, publisher of Sparkman Magazine for over 24 years and an employment specialist who has worked with the Urban League of Metropolitan St. Louis as well as board members of the Spanish Lake Community Association were in attendance.

Rev. Strong congratulated Applied Scholastics for 50 years of improved student outcomes, especially for those left behind by the education system. "I have seen Study Technology programs and tutoring increase reading ability and comprehension with thousands of students right here in the Greater St. Louis area. These students were struggling and would not have made it without Applied Scholastics."

To commemorate the 50th Anniversary, the Honorable Senator Roy Blunt, from the State of Missouri, sent a message with his best wishes for the continued success of Applied Scholastics, delivered with the US flag flown over the Capitol in honor of the anniversary.

What began with a small group of educators in the United States in 1972 has grown into an international movement five decades later, with nearly a thousand licensed Applied Scholastics organizations in 72 countries in Europe, Africa, Asia, and Oceania, as well as North and South America and over 180,000 educators trained who have helped over 61 million students internationally. While the accomplishments of the past 50 years are much to celebrate, there are millions who are still in need of effective literacy and education solutions. According to a Gallup analysis of data from the US Department of Education, roughly half of those aged 16 to 74 years old, 130 million people or 54%, lack literacy proficiency.

A recent survey of educators conducted by Applied Scholastics International showed 85% feel the need to be better equipped to address the frequent behavioral issues in their classrooms (outbursts, anger, and disruptive behavior), while struggling to focus their student's attention on the subjects being studied.

Mr. Hubbard recognized the deep effects on society of lowered education standards and literacy levels, observing that the illiterate or functionally illiterate, denied work and opportunity, often fall prey to criminality, vice, or drugs. Thus, he embarked on an examination of the subject of study and isolated the precise causes for the success or failure of any activity or study. His research in education is collectively known as Study Technology, and these methods offer truly revolutionary results in improved literacy, vocabulary, and comprehension.

It is with this in mind the executives and staff of the Applied Scholastics network have rededicated themselves to the mission of bringing effective educational tools to educators, students as well as parents through training programs at the Applied Scholastics International Training Center as they look toward the next 50 years of bringing real help and effective educational solutions to those in need.