Battlefield Earth Kicks Off Its 40th Anniversary with Public Librarians 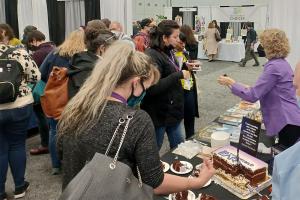 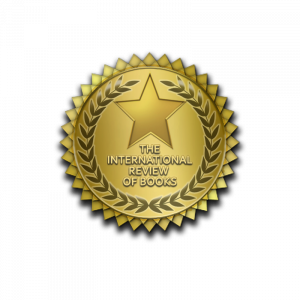 The International Review of Books badge of achievement for Battlefield Earth.

I love the fiction by L. Ron Hubbard. Great escapist fiction for these trying times. You forget your troubles. I love them.”

Kim Catalano, Snr VP Sales & Rights, and Juliet Wills, VP Trade, were at the PLA for the presentation. Catalano noted the importance that libraries had in “Battlefield Earth,” “In Battlefield Earth, the hero was a teen when he started his journey to save humanity, and that journey was won, not by being bigger or stronger than the enemy, but through acquiring an education that began in a library.” In the story, it was the Psychlos, an alien race, who had nearly wiped out humankind. And now, in the year 3000, a thousand years later, the planet’s security chief for the Psychlos, Terl, has taken Tyler to a library that had been preserved. From “Battlefield Earth,” “‘I don’t think you know how to read a library index. Come over here, animal.’ He yanked on the leash he had let run long. He was standing by stacks of small drawers. He bent over and opened one. ‘According to the Chinkos, every book has a card and the cards are in here in these drawers. Alphabetical. Got it?’”

Reid Goldsmith, a Library Trustee from Syosset, NY, noted about “Battlefield Earth,” “I found this book to be both exciting and a ‘Don’t Want To Put It Down’ book. It held my interest throughout the entire book. Libraries should have it in their collections as it is science fiction at its best from one of the preeminent science fiction authors in his heyday!!”

While Tom West, a librarian from Angleton, TX, stated, “I love the fiction by L. Ron Hubbard. Great escapist fiction for these trying times. You forget your troubles. I love them.”

Recently, “Battlefield Earth” was awarded the Golden Badge of Achievement by the International Review of Books, calling it “Science fiction at its best.” And the Online Book Club recommended it “for readers seeking heroes, aliens, and sci-fi technology. If you appreciate classic science fiction, you will relish this book. Young adults are also included in this recommendation.”

Upon release, Robert Heinlein, in a letter to Hubbard, called it “a terrific story!” while Publishers Weekly stated it “has everything: suspense, pathos, politics, war, humor, diplomacy and intergalactic finance.”

Since its release, “Battlefield Earth” has enjoyed considerable success with 34 weeks on bestseller lists—8 being New York Times. It has been published in 26 languages and has earned several international awards, including the Tetradramma d’Oro from Italy for its message of peace and the Saturn Award, presented by the Academy of Science Fiction, Fantasy, and Horror Films.

For more information on “Battlefield Earth” and other fiction works of L. Ron Hubbard, visit www.galaxypress.com.