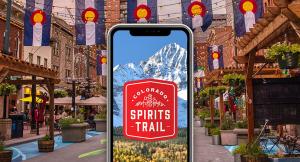 Their goal is to get people out traveling around the state of Colorado, so it’s a good symbiotic relationship.”

BOCA RATON, FL, UNITED STATES, May 24, 2022 /EINPresswire.com/ — Software developer Daruma Tech, creator of award-winning mobile passport apps for artisanal food and beverage lovers, is moving into the distilled spirit space with a new app commissioned by the Colorado Distillers Guild. With the app, a digitized upgrade of the guild’s paper Colorado Spirits Trail map, craft spirit aficionados will be able to find the distillery and tasting room closest to them; learn about the state’s distilleries, their offerings, and hours of operation; map their own tours of favorite distilleries; and earn points towards prizes by checking in at participating distilleries with the app.

The app was a natural evolution of the original paper trail map, which was launched in 2018. “At that time, it was just a paper map, and we were getting rolling with it in 2019,” said Lee Wood, treasurer of the Colorado Distillers Guild and co-owner of Wood’s High Mountain Distillery in Salida, Colorado. “And it was doing well, but then of course, the pandemic hit, and everything came to a halt. And so now we’re emerging out of that and looking at the trail and what’s the best way to serve the customers. And we’re relaunching the trail, but also doing it digitally.”

Colorado, he said, has a vibrant and growing craft spirits scene, with over 100 distilleries throughout the state, 60 of which belong to the Colorado Distillers Guild. “So Colorado has between the fifth- and sixth- largest number of distilleries in the state, across the US, [after] New York, California, Texas and Washington,” he said. “And on a per capita basis, I think we’re winning.”

During the pandemic, Wood said, he was lucky that his small-town distillery was able to survive on take-out bottle sales from supportive locals, which were enough to compensate for the loss of tasting room sales. But typically, he said, most of his business comes from out-of-town visitors who come to Salida for its famed white-water rafting. “We probably do the majority of our business from visitors as opposed to the people in town,” he said. And he recognized the app as a way to draw them in and encourage them to explore other distilleries as well. “And so we’re looking at ways that we can encourage folks to try other distilleries when they come into town and if they’re traveling around Colorado—there’s a lot of spirits. I just want to be able to bring them in and show them what we’re doing.”

Wood added that the Colorado Tourism Office, a big supporter of the original spirits trail map, immediately understood the app’s potential and is providing marketing and logistical support for the app’s launch. “Their goal is to get people out traveling around the state of Colorado, so it’s a good symbiotic relationship,” he said.

The guild’s partnership with Daruma Tech on the development of the app and its platform has also been rewarding, he said. “It’s been great,” he said. “So we’re continuing to finalize the site. Work has continued to move along at a good pace. And I think we’re getting closer, so we’re all super excited to see it.”

The Colorado Spirits App isn’t Wood’s first experience with a passport app—he’d previously participated in another trail program that included wineries and breweries as well as distilleries. (Maryland’s Craft Beverage App, also built by Daruma Tech, is another multi-product trail app that includes wine and beer trails as well as a distilled spirits trail.) So for Wood, the advantages of a phone-based passport app over printed paper maps were so obvious he was surprised few other distillers’ guilds had created app-based trails and passports of their own, especially since craft beer guilds have been switching to app-based passports for several years. “We went out to look for other state, guilds, or associations who were doing trails,” he said. “The famous one is the Kentucky Bourbon Trail. And they get millions of visitors a year, but they actually don’t have an app- based tour system set up. We were really surprised about it.”

But now, he said, the other guilds are starting to take notice. “We got a lot of guilds kind of watching what we’re doing as well and seeing if there’s an opportunity there to learn from what we’re doing. And so that’s kind of exciting,” he said.