Piano man Mike Petrone in front of Johnny’s Downtown in Cleveland, his musical home for 29 years. 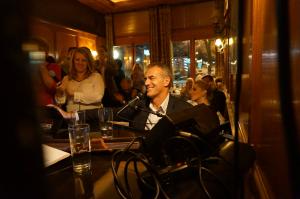 Mike Petrone entertaining patrons at the piano of Johnny’s Downtown in Cleveland.

29 years later, and entertainer, Mike Petrone, continues as a musical icon at the heart of the city’s nightlife.

Using music as a way of bringing people together has always been my ambition. Johnny’s Downtown has provided me the platform to live that life. I will be forever grateful to the owners.”

CLEVELAND, OHIO, UNITED STATES, April 17, 2022 /EINPresswire.com/ — There have been several impressive and notable runs by performers in the field of entertainment. Comedian Jay Leno logged 4,610 episodes as host of The Tonight Show, actor Yul Brynner, gave 4,625 performances on Broadway in “The King and I” but you might not know that surpisingly, the City of Cleveland, has a musicain on a similarly historic run.

Johnny’s Downtown, a well-regarded fine dining establishment in the heart of Cleveland’s Warehouse District, known for it’s celebrities and high-powered clientele, opened it’s doors June 3rd, 1993.  At the piano that day was hometown musician, and second generation piano man, Mike Petrone.  Now, nearly 29 years later, Johnny’s Downtown is proud to announce the celebration of Mike’s Petrone’s 6,000th performance at the restaurant.  You read that correctly, Friday night, May 6th, 2022 will be Mike’s 6,000th night behind the Johnny’s piano!

Johnny’s owners, Joe Santosuousso and Paul Anthony, are welcoming not only longtime patrons, but all those interested in celebrating Mike’s milestone achievement to stop in that night and raise a glass and a song to “Cleveland’s Piano Man.”  Dinner reservations can be made by calling (216) 623-0055 or by visiting their website www.johnnyscleveland.com  There will also be an invitation only VIP reception on Thursday, May 5th to raise money for The Greater Cleveland Food Bank. (Performance 5,999.)

Mike celebrated his 5,000th performance on November 17th, 2017, and though Covid-19 forced Johnny’s to close its doors for several months, since late spring of 2020, Johnny’s and their piano man have been back at it and pressing on through the ups and downs of Covid-19 and its variants.

Johnny’s is family-owned, and the original Johnny’s Bar on Fulton Road in Cleveland was started by Joe Santosuousso’s grandmother in 1929.  Similarly, Mike’s father began performing as a piano player in Cleveland restaurants in 1962.  So, 93 years of Santosuoussos running restaurants in Cleveland, and 60 years of Petrones playing in them.  Go figure, a very Cleveland story in a city known for its grit and determination.

How did Mike arrive at Johnny’s? “At the last minute,” says Petrone. “I had a bass player friend who worked as a server at Johnny’s Bar on Fulton. He called me the night before Johnny’s Downtown opened and asked if I was available the next day. It was a Tuesday I think. I showed up and played the first night. Afterwards, Joe asked me if I could supply him piano players going forward. I was happy to oblige. The first six or seven years I played there one or two nights a week, then in 2000 I became a regular employee and took five nights a week. The rest is history. I did not see 29 years coming.”

What’s next for Petrone at Johnny’s?  Pianist Bobby Short had a 35 year run at the Cafe Carlyle in New York City, perhaps the greatest and most storied run in the business, somewhere in the neighborhood of 7,000 nights.  Is that approachable for Petrone at Johnny’s? “I would like to think so,” says Petrone. “I’m certainly game to try.  Hopefully the boss is willing and isn’t too sick of me. Stay tuned!  We will find out.”