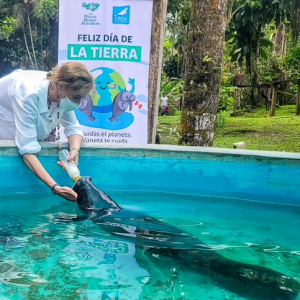 IQUITOS, LORETO, PERU, April 22, 2022 /EINPresswire.com/ — United States Ambassador to Peru Lisa Kenna recently visited the Amazon Rescue Center in Iquitos, Peru as part of CREA and The Dallas World Aquarium’s Celebration of Earth Day 2022. Peru’s wide range of ecosystems from the beautiful lowland coastal region, the spectacular Andes Mountains, to the tropical forests full of lush vegetation surrounding the Amazon River are all responsible for its frequent inclusion as one of the top “mega diversities” of the world.

The Ambassador’s visit was important and meaningful to everyone involved, and it serves as a testimony to the many years of commitment and hard work in establishing the Amazon Rescue Center as a successful and world-renowned Conservation Program.

In February 2008, the Dallas World Aquarium (DWA) was contacted requesting assistance with four orphaned Amazonian manatees (Trichechus inunguis) in Iquitos, Peru. The DWA immediately sent much needed medically produced powdered milk for the babies, laboratory supplies and funds to pay for their care. Arrangements were made for the manatees to temporarily live in a small pool that was built at a private home in Iquitos. They were soon moved to a larger dedicated site, as the program quickly outgrew the temporary care facility.

This initial involvement resulted in a united effort among The Dallas World Aquarium and local agencies, such as Dirección Regional de la Producción de Loreto, Instituto de Investigaciones de la Amazonía Peruana and Acobia-DWAzoo. The Amazon Rescue Center not only rescues and rehabilitates orphaned or injured manatees but other mammals as well, it has a long-standing environmental education program that is the core of the conservation project.

In April of this year, a broader and more extensive environmental education program was launched by the Amazon Rescue Center in addition to their existing education programs. This new educational initiatives program is sponsored in its entirety by The Dallas World Aquarium with the oversight of the founder and director Daryl Richardson. The program is led by local certified educators who visit communities in remote parts of the Peruvian Amazon as well as schools in the city of Iquitos. A new building was designed and built adjacent to the rescue center as the headquarters for the educators and their volunteers. This environmental education program will teach everyone involved about the biodiversity of the Amazon and the importance of sustainability with the natural resources of this expansive area.

Since 2008, 62 manatees have been part of the initiative, with the success of the program being highlighted on Earth Day, 2011 when the first five manatees were released back into their natural habitat. An additional 20 manatees have been released through 2022 for a total of 25 releases. The center also supports the local environment agencies with the temporary reception of confiscated animals that are rehabilitated and sent back in to the wild.