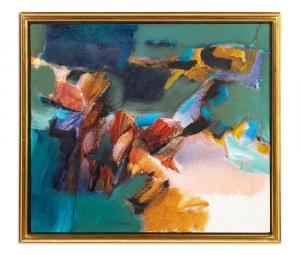 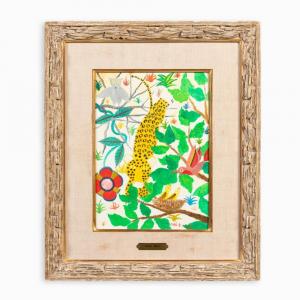 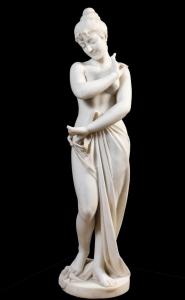 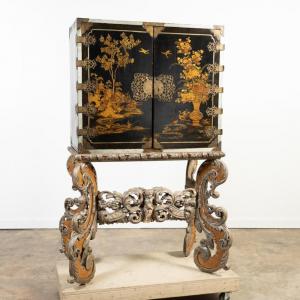 Late 18th/early 19th century William and Mary parcel gilt and black lacquer Japanned cabinet on a stand, the cabinet decorated with a riverscape, foliage and birds ($10,625). 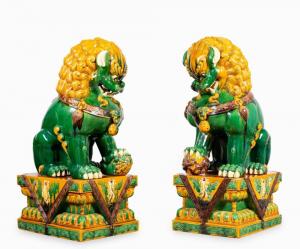 Monumental pair of Chinese Sancai glaze ceramic seated Buddhist lion figures on stands, 57 inches tall, the male standing on a brocade ball and the female with her cub ($5,938).

The semi-nude female marble sculpture was the auction’s overall top lot in a sale that grossed a little more than $1.2 million (all prices quoted include a 25 percent buyer’s premium). The white marble statue depicted a semi-nude draped standing female, approximately 45 ¼ inches tall. It had a partially obscured signature (“G. La….”) and was probably created between 1902-1909.

Syd Solomon’s Untitled Abstract painting, done in celadon, peach, rust and cobalt, was signed lower center and measured 28 ½ inches by 32 ½ inches (canvas, less frame). The Maik painting, titled Le Reveille du Hibou (The Awakening of the Owl), was artist signed and dated lower right and titled on verso. It was nicely housed in a frame that measured 20 ¾ inches by 17 ¼ inches.

The auction, over 1,000 lots in all, featured antique rugs, estate jewelry and watches, design from the mid-20th century, fine art by listed artists, sterling silver and Boston coin silver, period antiques from America, the UK and Europe, and multiple artworks by Marcel Mouly, Nicola Simbari and Theodor Seuss Geisel (the artist better known as Dr. Seuss).

There was no in-person bidding, but 2,600 people bid online through LiveAuctioneers.com, Invaluable.com and Bidsquare.com. Phone and absentee bids were also taken. Following are additional highlights from the auction. Prices are inclusive of the 25 percent buyer’s premium.

Session 1, on Saturday, April 9th, featured Asian arts, modern and mid-century art and design, silver and estate jewelry – 507 lots in all. The Solomon and Maik paintings were sold on Day 1.

The other was an early 20th century bronze sculpture after Pierre-Jules Mene (French, 1810-1879), titled Before the Hunt, on a later wooden base, signed in mould “P.J. Meane 1869”, with a title and artist plate to base, 27 ¾ inches tall (excluding the base). The casting came out of the estate of Jerome Fletcher of Ponte Vedra Beach, Fla. ($10,000).

A few other lots flirted with the $10,000 mark, just falling shy. One was an English (or American) 19th century pair of Federal or Regency giltwood convex two-light girandole mirrors, each surmounted by an eagle, having an ebonized inner fillet surrounded by spheres, and decorated with acanthus leaves, unmarked, one about 36 inches tall ($9,375).

Rounding out this short list of top achievers in the two-day sale was a pair of 19th century French Empire gilt porcelain potpourri, each one having a spreading form with corners decorated with anthemion, the reserves alternating with landscapes and classical muses, having a “Nast Paris” mark to underside over the overpaint, 11 ½ inches tall ($3,750).

Ahlers & Ogletree is a multi-faceted, family-owned business that spans the antiques, estate sale, wholesale, liquidation, auction and related industries. Ahlers & Ogletree is always seeking quality consignments for future auctions. To consign an item, an estate or a collection, you may call them at 404-869-2478; or, you can send them an e-mail, at consign@AandOauctions.com.